F. Nelson Stover -- cultural engineer.  Nelson has a BSc from Purdue University in Computer Science and a BDiv degree from Chicago Theological Seminary.

He conducted community development projects in India, Egypt, Australia and the US with the Institute of Cultural Affairs.  For 20 years he designed Constituent Management Systems for non-profit organizations.

He now chairs Emerging Ecology and continues writing and lecturing.  People can contact Nelson in a variety of ways. 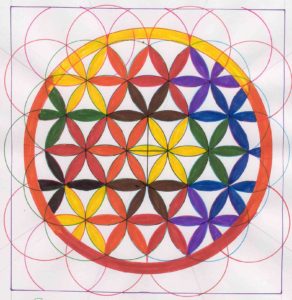 The materials on this page have been prepared by F. Nelson Stover.
They do not, necessarily, express the consensed opinion of the Board of Emerging Ecology.

A research document entitled "To All and Back" (Updated: July 28, 2022) describes the topology of the interior landscape of individuals and groups actively involved in bending the social trends, of participating in active social change.  Much of this writing draws on the earlier work of the Research Assemblies of the ICA and EI.  The document includes mandalas by Mayuri Dhanad and digital artwork by Tracey Brown.

Nelson's seminary thesis focused on the role of religious communities in social change.  Although it was written in 1970, it remains relevant today.  It is now available in digital form.

Beginning in 1984, when his father died, Nelson has been writing a collection of poems and monographs reflecting on the experience of being in the presence of dying people.  In The Realm of the Gossamer Veil (Updated: March 5, 2020) provides reflective pieces in the context of an emerging Universe.

In 1988, Nelson began working on a Global Calendar as a way to create a way of celebrating within the context of an emerging universe.  Anyone wishing to join in this celebration and holiday sequence should contact Nelson.

Additional writings by Nelson are available at other places on this website.

Since first meeting Thomas Berry personally in 1994, Thomas' perspectives and insights have influenced Nelson's writings and presentations.  In 2012, Nelson and his wife, Elaine, received the Greensboro Public Library's Thomas Berry Award.  An excerpted version of Thomas' book "The Great Work" and a free, six-session study guide are available on-line from Emerging Ecology.

In 2014, Nelson completed his first book entitled "Through Three Portals:  Helping Tomorrow Unfold".  It presents a systematic approach to theology in the 21st Century.  It can be ordered through the Emerging Ecology website.

In 2009, Nelson gave a presentation at the dedication of the Joseph W. Mathews Library in Washington, DC.  This was updated and both versions are available for download.

Nelson has been asked to preach for six years at UUs in Covenant, a liberal religious congregation that meets in downtown Greensboro.  A catalog of these 71 worldview-oriented talks outlines the themes of each as well as the overall them for each year.  Twenty-two of the sermons (which are more like worldview talks) are available for download as shown below.

The 2020 series is entitled "A Fresh Perspective" (Updated 8/3/2020). This series draws on the wisdom of the Ecumenical Institute and the Institute of Cultural Affairs that everyone has the possibility of living in two realms, This World where our daily activities sustain life on Planet Earth and The Other World where Mystery, Care, Consciousness and Tranquility fill every moment with meaning.  The YouTube links follow:

In 2019, the series focused on enriching our individual and corporate Interior Mansion.  The series focused on developing the personal practices and perspectives that foster creative engagement in shaping the future of our emerging Universe.  Using the image of interior space with a variety of different rooms, Rev. F. Nelson Stover delivered a series of sermons focusing on ways to understand and enhance the unique properties of each space.  These sermons drew on the Institutes' Action Research on the New Religious Mode.  The YouTube links follow:

In 2018, Nelson's sermon series at UU in Covenant was entitled "Our Common Journey".  The monthly sermons focus on 12 major events in the 14-billion year journey of the Universe and how these illumine our individual lives and collective experiences.  The primary frame of reference for this series centered on the work of Thomas Berry and Brian Swimme. Sermons in the 2018 series are available on YouTube:

During 2017, Nelson preached a series of 11 sermons focused on Opportunities for liberal religious communities to meet the challenges of the 21st Century.  This series drew heavily on Nelson's work with the Ecumenical Institute and the Institute of Cultural Affairs as well as the more recent work of Emerging Ecology's Worldview Salons.

The sermons are available on YouTube by following the links below:

Additional presentations by Nelson are available on the Emerging Ecology Worldview Salons page and on the Downloads page.

Since 2001, when Nelson encountered the drawings of Robert L. Powell, Sr., he has been fascinated with the possibilities of using a compass and straight-edge to unlock many of the wonders of the Universe.

Many of these practices have been adopted by Mayuri Dhanad in her mandala designs.